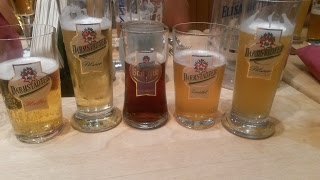 Mornday morning we started our day with a presentation from the President of the Hochschule Darmstadt and the woman in charge of international affairs. They told us about how the school works, and the city of Darmstadt and such. We also got our wireless login for the schools router. In the afternoon we got our first German course, I was the only student in the intermediate category, but only untill Tuesday as the two russian student had not arrived yet, and one of them also had the intermediate.That night we had dinner in a “Braustübl” near the main train station in Darmstadt where there also was beer tasting. The food was some kind of traditional German food, the appetiser was some fried fish with green sauce and salat, the main course was two kinds of beef (a stew type and a very red roastbeef like meat). The food was very nice (but kinda different from what I usually eat) and the beers were relatively good as well, I’m not much of a beer person (don’t really care for the taste and I’m allergic to yeast).

Tuesday was German class all day. I think we just realaxed after that, maybe went out for dinner.

After school wednesday we went on a guided tour around the Mathildenhöhe, which is one of the oldest parts of Darmstadt. It was a really cool place with a lot of very old buildings, a russian chapel, a wedding tower (where people still can get married) and a lot of art nouveau houses.

Thursday was German movie night, where we saw a film called “7 Zwerge” (7 dwarfs). It was really a strange movie, with strange humour (probably very German humour). It was funny at times, but the greatest thing was probably the evil queen – her make-up was awesome! Very ekstreme but awesome.

Friday we went to Frankfurt after our german lesson to visit the German stock exchange. We got a guided tour round the place and we got to look down into the place where the brokers work. We were told that they do 12 hour shifts, where they have to be available at all times, so no breaks other than short restroom breaks as they need to be ready to do deals with short notice.
For dinner we went to a typical German restaurant with a specialty from Frankfurt: Apfelwein (Apple wine), since we were in Frankfurt, we might as well try it. I got 4 different sausages, since Germany is known for them, with sauerkraut and dark bread with butter. There was enough food in the sausages so I didn’t eat that much of the bread or sauerkraut (also, it turns out, I’m not a big fan of sauerkraut.).

Saturday we went sightseeing on the Rhine river. All day it was crazy hot, with about 37 degrees Celcius at the highest, but the temperature was very high all day. We got the “romantic tour” around the winery, hunting castle and a boat trip down the river. Everything was amazingly beautiful, old castles, pretty forrests and nature in general. Before going back home to Darmstadt we stopped at a restaurant and got something to drink. I shared a bottle of white wine with 3 or 4 others, but we haven’t gotten anything to eat since lunch, and it was at least 6 o’clock in the evening, so we basically got a bit tipsy. On the way home we were so tired we basically slept all the way back. Back in Darmstadt we got some Döner kebab and ate in a park on the grass.

Sunday Svea picked us up from the hotel and we got on the way to the Messel Pit fossil site, which is a UNESCO world heritage due to the many, and old, fossils. On the way there we were supposed to get on a bus, but the bulletin board didn’t show the bus we needed, so the russian guy went wandering, so when the bus came 3 minutes later (on time) he was nowhere to be found. Two of the girls got on the bus and had to get out at the next stop and run back so we could get on the tram, which was not as easy as just taking the bus, but the bus wouldn’t be comming for another hour or so. Luckily everyone was present when the tram came.  So we finally got there. There was a museum we looked at on our own, with lots of fossils and stories about the place, and then we got a guided tour down to the pit. Sadly we had to cut the tour early to make our bus back, otherwise we had to wait an hour and a half. 🙁 So we went home where we just relaxed and got ready for a new week of learning.