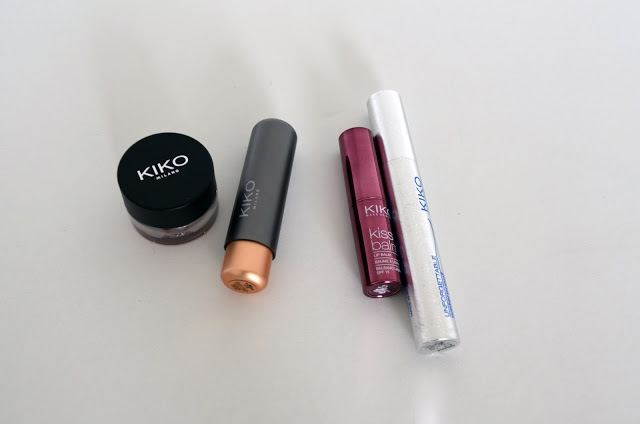 Last weekend I went to Bergamo, Italy, which is a city about an hour from Milan. The trip was paid by my work, since it was a social bonding type deal, where we would get to know each other better – I figured, why not tag along (if nothing else I could see some pretty things, and buy some new makeup, since I knew KIKO is from Italy).
I only brought carry on baggage, so I couldn’t shop that much makeup while we were in Bergamo and Milan, since I already had filled my liquids bag.
But once we got to the airport, there was no limitations 🙂 Before hand I had researched whether there was a KIKO store in the airport, since I knew I would get something here – thankfully there was a store!
So as soon as we got to the airport, I just headed straight for the KIKO store (I have a tendency to spend a lot of time looking at makeup – so I figured I would rather have a lot of time after shopping, than stressing about making the fight in time).
The store was a small, but efficient one, with everything easily accessible – and very clean as well, I feel like makeup stores usually are really dirty since people can’t keep things clean.
So actually only I got 4 things, since I’m going to USA later this summer, so I’m saving my makeup budget for this 🙂
I got:
KIKO Cream Crush Lasting Colour Eyeshadow in 03, which is a lovely mahogany cream eyeshadow, that I found (and fell for) on this post over on MakeupandBeautyblog.com (which is a great place to lust over products).
KIKO Unforgettable Waterproof Mascara, which is a mascara that kinda got thrown in the mix since there was some kind of promotion, and the cassier told me about.
KIKO Velvet Passion in 317, a matte wine coloured lipstick.
KIKO kiss balm Lip Balm in 06 Blackberry, a tinted lip balm in a blackberry colour.

The packaging of the velvet passion lipstick has a magnetic “lock” which I found really genius. I don’t know how tight the seal is with this lock, but I like the idea.
The rest of the packaging is fairly standard, though I really like that you can see the colour of the lip balm on the tube.

I’m not sure how I feel about the shape of the velvet passion lipstick, I prefer more of a point, but we’ll see when I try it on. The mascara is a curve and volume one, which is the reason why the spoolie has this curved shape.

When I swatched the cream crush lasting eyeshadow, I found it increadibly creamy, almost like a firm mousse texture. The Velvet Passion lipstick seemed pretty creamy for a matte lipstick, and the tinted lip balm is as can be expected: creamy and moisturizing.

This was my first impressions of the haul – I’ll try and do a look with the products later, and give a fuller review.

Have you gotten anything cool lately? I would love to hear about your hauls 🙂